ESCAPING THE NAZIS | The "Engelandvaarders"

Apr 23, 2017 — The Resistance Museum (Verzetsmuseum) in Amsterdam had a meeting on April 19 about the Engelandvaarders (literally, “England sailers”).

I heard about it from my second cousin Charles Boissevain of Leidschendam. After the Nazis invaded Holland in May 1940, they sealed the borders of the Netherlands with land patrols on the German and Belgian borders, bunkers on the shoreline, and marine patrols of the North Sea.

About 1,700 Engelandvaarders made it to England. The most dramatic escapes were by boat, but the majority of escapees, says Charles, traveled via Switzerland or Spain; some even escaped via Sweden. Of these escapees, the great majority, nearly 1,400 people (mostly men), went on to serve in the Allied armed forces or the Dutch government in exile.

An Engelandvaarders Museum has recently been created in a WW2 bunker in Noordwijk, the thin strip of high-priced coastal land on the North Sea just west of Lisse, where my mother's father was born and where tulips are on display at the Keukenhof. Noordijk is also the resting place of Saint Jerome and Maria Montessori, and where lived such other notables as Thomas Mann, Sigmund Freud and entrepreneur Alfred “Freddy” Heineken.

The principal founders of the Engelandvaarders Museum were Eddy Jonker, who crossed the North Sea in 1943 and became an RAF pilot, and historian Jos Teunissen, Board member of Erfgoed Leidschendam. A key partner in this effort was Pauline van Till, with whom Charles Boissevain has spoken several times. (Apr 24, 2017: Pauline has written to me to say that Eddy Jonker, now 96, still comes to the Museum every few weeks. Jos Teunissen and Pauline are involved in the museum in some way every day, in person or by phone. Open now for 19 months, the Museum has welcomed more than 10,000 visitors.)
Sierk Plantinga spoke first at the Verzetsmuseum, about how the Engelandvaarders escaped and the many and dangerous problems they had. He also spoke about how often things went wrong and the would-be escapees were captured, which usually meant immediate execution or delayed execution via deportation to the death camps.

The people who escaped included many Jewish refugees from the Nazis, but also Resistance workers who had been unmasked and were being hunted down, or pilots from the Allied Air Forces who survived their crash landings. Charles Boissevain noted that his father Robert Lucas “Bob” Boissevain (1895-1945) very likely was involved in these escapes, although he told his family nothing, to protect them, and did not survive the war to tell his tale. 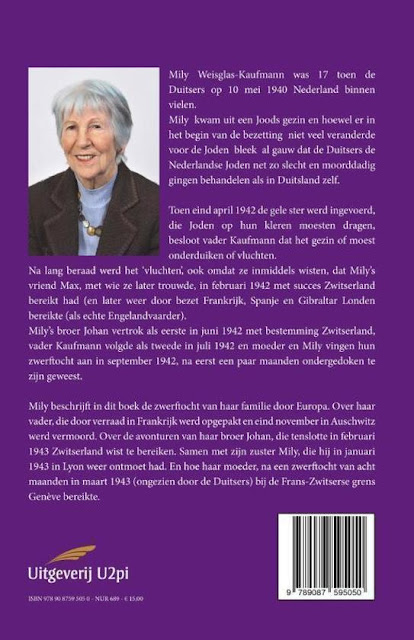 Mily Kaufmann Weisglas (1923-) told the group how many problems there were for those who tried to escape Holland.

She described how she and her parents and brother planned their escape. She was helped by a young man, Max Weisglas, with whom she was a student at the Amsterdams Lyceum.

Another classmate of hers was our cousin Charles, son of Menso Boissevain (brother of Bob, father of Charles from Leidschendam).  This Charles escaped during the war to Switzerland and then to London. (I knew well Menso's daughter Sacha, who died on Valentine's Day in 2009. Sacha headed the KLM flight attendants' union and upon retirement received a lifetime ticket to travel on KLM on a space-available basis. She used this ticket to visit the Marlin family frequently in Montreal, Washington, D.C. and then Berkhamsted, England).

Sadly, Mily's father was caught by a traitor at the Swiss border and she never saw him again. Mily in 2015 at age 92 published a book (in Dutch) about her escape from Holland that Charles says he has read and found very interesting. It is titled Knipoog ("Wink of an Eye") because once, as an attractive 19-year old girl, she gave a wink of her eye to a German soldier, who then turned his back to her to allow her to escape.

Hans Nieuwenhuijzen was also at the Verzetsmuseum meeting. Like Charles (and my eldest sister Olga), he was born in 1934. His father was in the Resistance together with Walraven "Wally" van Hall, about whom a Dutch film is being made. Wally and his brother Gijs robbed the Dutch National Bank for an enormous amount of money without being discovered and caught, perhaps the largest bank robbery in history. One way they did it was to print up counterfeit money, substitute it for bills in the bank vault, and take out real money for distribution to Resistance workers and onderduikers (literally "under-duckers" or "under-divers") such as Jewish refugees.

Wally and the father of Hans and others were caught in January 1945 and they were shot on February 12. They are buried at the Honorary Cemetery (Eerebegraafplaats) in Overveen/Bloemendaal. Charles and I visited the graves together in 2015.

Hans knew Charles Boissevain’s uncle Jan “Canada” Boissevain and his aunt Mies and their five children were living at Corellistraat 6, base of the deadly CS6 armed-Resistance unit. He knew how their sons Janka and Gi (caught working for CS6 on Oct 1, 1943 and shot by the Nazis) tried to escape to England on a home-made boat in the summer of 1940. At the Waddensea, just west of Friesland, they were caught by the Germans. Fortunately, a relative,  (his mother was a Boissevain) uncle Tom de Booy, worked for the Dutch Boat Rescue Society at the place where Janka and Gi arrived as prisoners. Uncle Tom told the Germans, laughing loudly, that this was just a students' joke, that the boys had a bet that they could reach one of the Wadden islands on their home-made boat. Now they had lost the bet, and would have to pay for a lot of beer for their friends. The Germans saw this was plausible and they let Janka and Gi free.

Caubo and Yad Vashem. Charles also met two friends (one of them 88, living now in Utah) with whom he had tried to convince the Yad Vashem Authorities in Israel to give a Yad Vashem Award to several people who  deserved it. Some did receive the award from the Israeli ambassador. But the award has been refused to Jean Caubo.

Caubo met trains in Paris from Holland. With his help some 800 Jewish refugees and others hunted by the Nazis escaped to Switzerland or Spain, until Caubo himself was betrayed and died at the hands of the Nazis.

Charles believes that Caubo’s failure to receive a Yad Vashem award is an injustice. Caubo has been honored posthumously by the French, the British, the American and the Dutch governments, but not by Yad Vashem, despite support from many rabbis, in Holland and Israel, and many political and diplomatic leaders.

Charles is persistent. He managed to get a war monument built in his home town of Leidschendam. He originally proposed this on May 3, 1999 to the Leidschendam Community Council, the Gemeenteraad. The Council rejected the proposal unanimously, but eventually Charles prevailed and it was built. More than 500 names of Jewish victims, Resistance heroes, soldiers and others are on the monument, and every year on May 4 a memorial ceremony is held there.


Charles Boissevain says he spends his time with his three "adorable" granddaughters — 5, 3 and almost 2 — and goes to concerts, this being a tradition going back at least to our mutual great-grandfather Charles of the Handelsblad, who campaigned for the creation of the Concertgebouw and whose son and son-in-law are recognized on the wall of the Concertgebouw as directors.

Charles swims in the North Sea, which in March is still cold, 8°C (46°F). The icy water would not have dissuaded him from swimming to England; what did it was Britain voting for Brexit, he says.
Posted by John Tepper Marlin at 9:54 PM