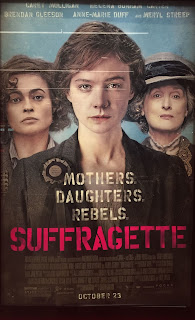 The new movie Suffragette is on view in New York City at the Bow Tie Cinema at 23rd Street and 8th Avenue. I saw it last night, based on last week's favorable review by A. O. Scott in The New York Times and a pitch from the good people behind the Turning Point Suffragist Memorial that I go see it.

Suffragette was released in Britain in October 2015 and has a limited release in the USA. It is showing this week in three Manhattan theaters. The movie depicts the Pankhurst suffragettes - activist women who turn at times to violence. The drama was directed by Sarah Gavron and written by Abi Morgan.

Maud Watts is the main character, played by Carey Mulligan. She is an appealing working girl, who works in a laundry where workplace conditions are dangerous and exhausting and the supervisor is a caricature of a slave-driving sexual predator. She seems on top of her job at the beginning of the movie, with no signs of fatigue in her eyes. The basic story line is her gradual awakening to the cause.

The cause is unequal rights in the British workplace and domestic life. The situation was similar in the United States. When Inez Milholland married my great-uncle, who was a Dutch citizen, she lost her right to practice law!

Maud Watts' husband is put under pressure by neighbors and the police and their common employer to keep his wife under control. Gradually she loses her husband, her home, her job and - the last tragic straw - her son, as her husband gives up their boy for adoption. In an emotion-rich scene, the adoptive mother says in a pathetic (or was it defiant?) apology - "We have a garden."

The story line drives home the idea that even in the civilized world of pre-war London (the movie is set in the year 1912) the suffragettes had good reason to object to their place in society and to demand political rights that they could only achieve by having first the vote.

Maud (i.e., Carey Mulligan) is the only thing that holds the movie together, however, and it is frustrating not to have a better sense of what is going on inside her head. Helena Bonham Carter shows potential as the educated link between the working-women cadre and the Pankhursts at the center, but the potential is never explored. Inez Milholland in New York was attacked by working-class women when she was released from jail within hours because the judge know her then-wealthy father, while they had to stay in jail overnight. This kind of distinction is barely shown, although it must have been understood by the filmmakers when they decided to focus on the working-class woman.

Meryl Streep as Mrs. Pankhurst is excellent as usual, but she is on only briefly, about five minutes. A '"cameo" appearance although she is to the movie what the prince of Denmark is to Hamlet. Her arrival is like a parting of the mist - we can understand what she is saying and we get a sense of what is going on in her head. I should note that the working class British-dialect accent in movie used by Maud and her friends may be easily understood among British audiences but I found it an annoying obstacle and I have been at school in England and Ireland for six full years and in the British Commonwealth for more than a decade.

The movie took a little over a year to produce. It is the first film in history to be shot in the Houses of Parliament with permission. Despite all this work, the movie has not been getting high marks in the USA - is generally not well reviewed, getting percentages in the 65-75 percent range.

It gets high marks for historical interest and purpose (showing connections with issues that are still with us today). Its mostly dark-and-misty atmosphere is excusable as  cunning way to save money in a historical movie (less to see, less to spend money on), and the theme is also a dark one. However, the linguistic barrier may be hard for American audiences.

The story of Maud Watts (Carey Mulligan) piques our interest, and the scene when her son is taken away is hard not to get angry and distressed about. But the arc of the story does not go far with her. For the most part we simply go round with her watching and learning to understand the aggression in the men and then the women around her. The true story of Emily Davison's walk in front of George V's horse at Epsom (movie clip here) is acted out realistically, although it is still not clear whether Davison's motivation was suicide or just to stop the race.

Bottom line, the movie tackles important material and the issues resonate on both sides of the Atlantic and in today's world. That's what A.O. Scott focuses on. But the movie itself is disappointing.
Posted by John Tepper Marlin at 5:52 AM